You are here: YMAC > ACCO

﻿﻿﻿﻿﻿﻿﻿﻿﻿On Australia Day the ‘Aboriginal Communities Charitable Organisation’ (ACCO) was presented with the Premier’s Active Citizenship Community Group Award for their contribution to the Pilbara community.

The ACCO is an excellent example of a regional organisation making a difference to the lives of Aboriginal people and is run by a volunteer staff base, most of whom are Indigenous.

As well as receiving public recognition from the Premier, the ACCO have also been approved for a Lotterywest grant for large commercial refrigerators for their food distribution outlet at TAFE’s Pundulmurra campus in South Hedland. The grant also includes a custom fitted ‘Commercial Kitchen Caravan’ to fully equip ACCO in their pursuit to deliver services to regional and remote communities in the Pilbara.

The Aboriginal Communities Charitable Organisation (ACCO) was formed in late 2008 as a non-profit charitable organisation to help ‘close the gap’ in local Indigenous communities. The idea came about from a common desire to make a difference to the lives of Aboriginal families living in Pilbara’s mining economy, where food and housing prices can be artificially high.

With the support and partnership of Yamatji Marlpa Aboriginal Corporation, Newcrest Mining and Foodbank the ACCO’s first primary project was the South Hedland Food Distribution Centre. The ACCO’s work aims to:

To learn more about the ACCO and their work please contact, Cris Olegario, YMAC’s Community and Business Development Coordinator on (08) 9172 5433. 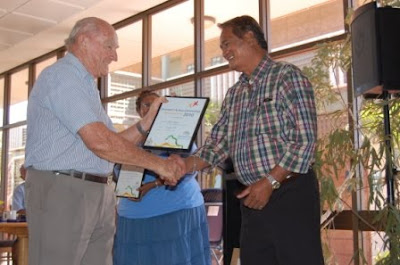 Congratulations to YMAC’s Business Development Officer, Cris Olegario in the South Hedland office, who on Tuesday 26 January, was presented with two awards in the Premier’s Australia Day Active Citizenship Award.

Cris was awarded in two categories for his tireless work towards the Aboriginal Communities Charitable Organisation.

YMAC’s Board of Directors, Management and staff congratulate Cris and thank him for his contribution to the Pilbara community.