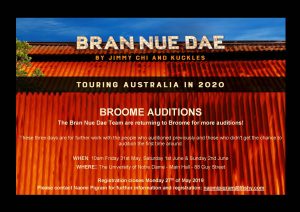 When Jimmy Chi’s book, Bran Nue Day premiered as a musical on a Perth stage in 1990 it placed Indigenous voices at the centre of the narrative and gave those voices volume like they had not had before. It is really exciting to know there is an opportunity for you or someone you know to add your voice to be part of the 30th anniversary tour of Bran Nue Day.

The final round of auditions for this tour will take place in Broome – where the story was born – across three days next week on 31 May, 1 and 2 June. You have until this Monday 27 May to register.

This is an opportunity for the production team to work with the people who have already auditioned and for those of you who didn’t get a chance to showcase your talents the first time.

The 30th anniversary tour will be driven by the production’s original director, Andrew Ross, and Bangarra dancer and Yawuru woman from Broome Tara Gower joins as Choreographer.

In 1990, Bran Nue Day was recognised nationally with the prestigious Sidney Myer Performing Arts Awards as an outstanding achievement in music and theatre. It takes intelligence and courage to bring crucial topics to a broader audience, and do so in such an engaging way.

It created conversations that we needed to have, and those conversations are still needed today, in 2019. We hope this 30th anniversary production empowers a new generation to carry the important messages of recognition, reconciliation and reclaiming identity to Australia again.

The Determination Area covers about 17,000 square kilometres of Nanda traditional country and encompasses: the town of Kalbarri, Kalbarri National Park, the Zuytdorp Nature Reserve and the Toolonga Nature Reserve. While all Country is important to the Nanda people, the area around the Murchison River is of particular significance as are Tamala and Coolcalalya. The Nanda people have negotiated the recognition of exclusive possession native title rights over important areas in the Determination Area. This includes land at paradise flats, around Bully, Wilgie Mia, Mooliabatanya and Syphon pools.

To view the Nanda native title determination video click on the link below. 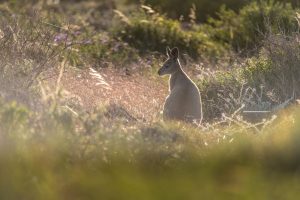 Photo: Malgana Country. Photo by Jose Kalpers from YMAC, with the permission of the Traditional Owners

A key election commitment has been made to Indigenous and non-Indigenous Australians to protect our country’s most precious assets.  Federal Labor announced its Caring For Country policy over the weekend – if they win government they will double the number of Indigenous Rangers, and double the funding for Indigenous Protected Areas over five years, as well as support these programs over a longer term, awarding 6 year contracts.

These important programs enable Rangers and communities to place a greater focus on protecting biodiversity— animals, plants and other species —as well as to conserving cultural resources, like sacred sites and rock art.

This pledge recognises the importance of the role Traditional Owners and Indigenous communities as care takers of our country. Yamatji Marlpa Aboriginal Corporation (YMAC) urges ALL political parties to at least match this level of commitment, and will hold all of them to their election promises.

To learn more about Labor’s commitment and policies, go here