Banjima elder Alec Tucker at the Federal Court in Perth

The Banjima People of the Central Pilbara are celebrating the end of a 15-year native title claim following yesterday’s Federal Court decision to recognise their cultural rights to around 10,200 square kms of traditional lands.

Alec Tucker, Banjima Elder said, “This is a joyful day for us. We’ve been looking forward to this for a long time. We’ve been waiting for so long. We know its Banjima country, it’s my grandfather’s country, my father’s country –  I think the old people would be happy about today.”

A formal recognition ceremony and celebrations will be held on Banjima Country at a future date.

Click here to read the media release, or check out the photo gallery.

The Town of Port Hedland will be holding its next Aboriginal Consultation Forum on Monday, September 9 at Lotteries House from 9am-1pm.

The forum has been set up as a way for Aboriginal and non-Aboriginal community members, council officers and local businesses to make connections and discuss issues important to them. The topic for this forum is “Networking and Information Sharing”.

The discussions will be shaped around suggestions from attendees on the day.  Please pass on this invite to anyone you feel would be interested in the discussions. All members of the Aboriginal community are welcome.

If you would like to attend,  please RSVP  to this email address for catering purposes: eacd@porthedland.wa.gov.au.

Opportunity to tell your stories

The Film & Television Institute (FTI) in partnership with ScreenWest, Rio Tinto, Leighton and Ngarda Civil & Mining is calling for applications from Indigenous communities, families and individuals who are interested in recording, preserving and archiving the stories, accomplishments and reflections of their community members.

Indigenous Community Stories is an initiative, which is aiming to film 100 Western Australian Indigenous stories and digitally archive them for future generations to view over the next 100 years and beyond. FTI is keen to hear from community coordinators or representatives who want to have their community’s stories recorded.

To find out more and to get your application, visit the FTI website. Applications are due on 6 September. 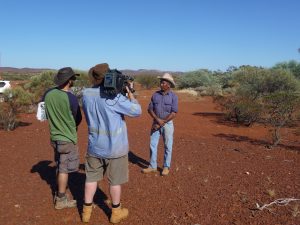 Earlier this year, YMAC participated in this initiative in three different communities. Check out some of the photos here, or read more below:

Spread the Word about constitutional recognition

“Spread the Word” is a campaign run by ANTaR (Australia for Native Title and Reconciliation) to raise awareness about the constitutional recognition of Australia’s First Peoples.

Click here to find out more about the Spread the Word campaign, or about constitutional recognition.

If you would like to join or start an activist group on constitutional recognition, you can send your request to campaigns@antar.org.au.

Stargazing and Yamatji culture are coming together at Murchison Settlement for the 2013 Murchison Astrofest. CSIRO and the Shire of Murchison are bringing together science and traditional culture in a day and night of talks, films, bush tucker, music, camping, and of course, stargazing.

Bookings are essential, so make sure to complete your registration form and send it to Priscilla.clayton@csiro.au.

The next round of Community Grants from the City of Greater Geraldton is now open. The aim of these grants is to provide assistance to local community groups and organisations that make positive contributions to the quality of life in the Greater Geraldton region. Community groups that need funding for programs or equipment are encouraged to apply.

The closing date for applications in 22 August 2013. For more information visit www.cgg.wa.gov.au/residents/grants or call 9956 6993.