The Bernier and Dorre Island Lock Hospitals is a shocking part of WA’s history. Between 1908 and 1919, several hundred Aboriginal people from across WA were forcibly removed from their family and country to these lock hospitals via Carnarvon. Many of those family members who were separated during the lock hospital scheme never saw each other again. It’s conservatively estimated that more than 200 people died on the islands.

On Wednesday, 9 January 2019, a Centennial Ceremony will be held at Carnarvon’s One Mile Jetty Café at 3pm. The ceremony will remember and recognise the story, and history of the Bernier and Dorre Island Lock Hospital tragedy.

The State Government and the Shire of Carnarvon have provided funding for a bronze sculpture to acknowledge the centennial anniversary of the last person to be repatriated from the Lock Hospitals, off the coast of Carnarvon. The sculpture will be unveiled at a separate event in 2019.

The State Government is calling for Expressions of Interest for funding under the second round of the $20 million Aboriginal Ranger Program.

The first round of the program provided $8.45 million to 13 groups across the State, creating 85 new jobs and 80 training opportunities for Aboriginal people, including 47 female Aboriginal ranger positions. YMAC was successful in securing funding in the first round on behalf of Malgana Shark Bay People’s Native Title Claim Group, as part of the proposed “Pathway to a Malgana Country Land and Sea Management Program”.

Round two will see rangers employed to undertake land and sea management including conservation, cultural, tourism and education activities across a range of tenures. A total of $9 million will be available in the second round, for single or multi-year projects up to three years. 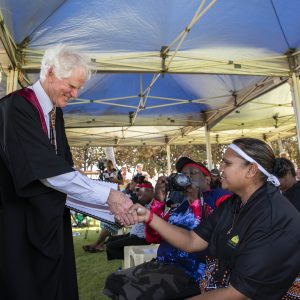 The judgement made by Justice Murphy recognised the native title rights and interests held by the Malgana people in relation to the land and waters covered by the Determination Area.

“I congratulate the Malgana people for their dedication to achieving recognition of their native title. It took too long and too much work, and to get there is a great achievement.”

The Determination Area covers about 28,800 square kilometres of Malgana traditional country and encompasses: much of the UNESCO World Heritage Listed (1991) Area of Shark Bay and the Shark Bay Marine Park, Dirk Hartog Island National Park, Edel Land Peninsula and Steep Point – the most westerly point on Mainland Australia, the township of Denham and the whole of the Peron Peninsula and number of pastoral leases.

The Determination Area is home to places of special spiritual significance to the Malgana people, in particular the burial places of the old people, whose spirits still inhabit Malgana country today.

The Malgana people have maintained a traditional connection to this area since time immemorial, with a vibrant living culture maintained through stories, spiritual connections to the ancestors and country, caring for and managing country and waters, and by passing on traditional knowledge through each generation. Malgana people have a strong connection to their land and waters through their intrinsic local knowledge of its natural resources and the land and seascape.

Fishing is one of the main customary activities of many Malgana people, which allows people to spend time on their waters teaching younger relatives about the sea’s resources and the ecological knowledge to look after the country. Malgana people also have extensive knowledge of the land’s resources learned from their old people, from the collection of bird and turtle eggs, the hunting of animals to the gathering of native plant foods and medicines depending on the seasons.

This same law and culture is still very alive today and is passed on through the generations in the same way as it has been for thousands of years.

Traditional Owner Marika Oakley, who is also Chairperson of the Malgana Aboriginal Corporation said, “Country doesn’t just belong to us. We belong to Country and we need Country as much as Country needs us.”

Yamatji Marlpa Aboriginal Corporation Chief Executive Officer Simon Hawkins said, “Congratulations to the Malgana People on their success in what has been a long and hard fight.  Success has come from the persistence and determination of Malgana Elders – sadly, some of whom are no longer with us to witness the outcome of their efforts.

“Today is a day of celebration and we look forward to the future. Moving forward, YMAC is excited about the prospect of working collectively with the Malgana People on a range of initiatives and programs that they want to develop, for the benefit of their community,” Mr Hawkins said.