The Local Capability Fund (LCF) – Regional Aboriginal Business round is a State Government initiative to help competitive regionally-based Aboriginal businesses to better prepare to participate as suppliers of products, services and works to State, Federal or Local Government agencies and the private sector.

This round of LCF will provide eligible Aboriginal businesses with up to $20,000 in funding to assist them to secure procurement opportunities in the public and private sectors. Funding will be provided for the following eligible activities:

The Heart of Our Outback – Landscape and Nature Photography Prize

Do you love taking photos in the Outback and want to WIN $1000?

Entries are currently open for The Heart of Our Outback – Landscape and Nature Photography Prize, presented by Create Ranger Parks with the support of the WA Photographic Federation. The competition will showcase the unique landscapes and natural beauty of WA’s Pilbara, Mid West and Gascoyne.

Create Ranger Parks is a community driven proposal to ensure protection for 5 million hectares of WA’s remarkable Outback heart. We’re proud to be a supporter of the Create Ranger Parks initiative – and entering the photo competition is one way you can get involved!

Enter your best landscape and nature images to help inspire all Western Australians and encourage the State Government to create a new national park network, managed by Indigenous rangers, for all of us to experience and enjoy.

All shortlisted entries will be exhibited from Friday 24th August until Tuesday 28th August at the Gary Holland Community Centre in Rockingham. The Premier, Mark McGowan, has been invited to open the exhibition. A grand prize of $1000 cash will be awarded to the best overall image in the exhibition.

Entries are now open and will close on Sunday 5th August.

Visit the official competition webpage to find out more about the categories and to submit your entries: www.CreateRangerParks.org.au/outbackphotoprize

Share with your friends and get snapping! We can’t wait to see some of your fabulous images make it into the exhibition in August.

The Australian newspaper followed up on our Pilbara Solar Media Statement on Wednesday 18 July 2018 interviewing our CEO Simon Hawkins and publishing an article in its Monday 23 July 2018 edition on page 6. 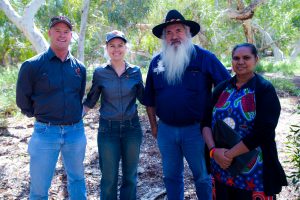 The 5th Annual On-Country Bush Meeting at Yule River was covered by media from across the country; with more than 167 separate mentions across print, radio and television within a week. Our gallery offers a summary of the key articles that featured in the media.

Yesterday’s report by the Australian Energy Market Operator (AEMO), the nation’s independent energy market operator, to COAG, stated that ageing coal-fired power plants would still deliver the cheapest electricity for the next 20 years.

Pilbara Solar Director, and renewable energy developer, Richard Finlay-Jones, said the report did not recognise regions like the Pilbara which had one of the greatest solar resources in the world, and was one of the most energy intensive locations in the country.

“WA is the most solar rich state in the nation, and, with the right support from all levels of government, the Pilbara has the potential to become a 100 per cent renewable Zero Emissions Zone within a decade,” Dr Finlay-Jones said.

Dr Finlay-Jones said current investment in renewable energy had never been stronger in Australia, and the power source never cheaper, with states with the largest targets demonstrating the greatest investment benefits, and the cheapest power.

“Renewable energy deployment had been driving down the wholesale price of power, and wind and solar energy is now cheaper than coal and diesel,” Dr Finlay-Jones said.

“The AEMO report to COAG actually states that Bloomberg New Energy Finance estimates about 90 per cent of the $88bn forecast spent on adding power capacity in Australia will be outlaid on clean energy.

“It is imperative that regions like the Pilbara are recognised among the greatest solar resources in the world.”

Pilbara Solar is 25 per cent owned by the Yamatji Marlpa Aboriginal Corporation (YMAC), which YMAC Chief Executive, Simon Hawkins, said represented Traditional Owners whose lands covered one million square kilometres in WA with some of the best solar resources in the world.

The 5th Annual On-Country Bush Meeting at Yule River was another extraordinary gathering bringing together more than 400 Traditional Owners from across the Pilbara to discuss issues affecting them and their families. The meeting endorsed Pilbara Aboriginal Voice (PAV), the remarkable group borne out of the 4th meeting in 2017. PAV has made significant progress working together to address issues including language preservation, remote housing, the protection of Aboriginal heritage, Constitutional Recognition, health, education, justice, and the welfare of children. This year, the 40-strong group welcomed more than 20 new members, and was officially endorsed and recognised by both Federal and State Aboriginal Affairs Ministers Ben Wyatt and Senator Nigel Scullion and others. PAV was acknowledged as an historic union of language groups working as one voice to call on all levels of government to improve living conditions for Aboriginal West Australians. Today and every day, we recognise Aboriginal Elder, our Deputy Co-Chairperson, Mrs Doris Eaton, for her ongoing inspirational leadership, and great vision for the Pilbara, our Aboriginal Directors, and our dedicated YMAC staff, for their contributions to the Yule River meeting. For more information about Yule River meetings and their history, please see https://lnkd.in/gEbB4J2

The 5th Annual On-Country Bush Meeting at Yule River on 11 and 12 July will once again bring together Traditional Owners from across Western Australia to discuss the issues that affect them and their families.

Day One supports Traditional Owners in their cultural decision-making to develop solution-based responses to issues, and will conclude with a celebration of custom and culture including traditional singing and dancing performed by a variety of Aboriginal community groups. Senator Nigel Scullion, Federal Minister for Indigenous Affairs, has registered his attendance on Day 1.

“This is a forum for Traditional Owners, politicians, and bureaucrats to meet, to discuss key issues,” Mr Hawkins said.

“The event represents a significant opportunity for revitalising trust, relationship-building and providing a platform for authentic engagement, and YMAC is proud to facilitate the annual meeting for the benefit of Traditional Owners across the State.”

“The 2018 meeting will look at the progress of these resolutions, and the need for others,“ Mr Hawkins said.

“Other issues on the agenda include the expiry of the Commonwealth and State Governments’ National Partnership Agreement on Remote Housing on 30 June 2018 which has left residents of remote communities across WA facing deep uncertainty over their future.

“There is also outstanding the 2016 Yule River call for an independent inquiry into the State Government’s handling of Aboriginal heritage sites across the Pilbara.”

YMAC will also welcome the Hedland Aboriginal Strong Leaders (HASL) who are proud to be presenting the 2018 Port Hedland NAIDOC Awards at 1pm on Day Two. Raylene Button, HASL Co-chair, has thanked the Julyardi Aboriginal Corporation and Pilbara Development Commission for their support, with 15 awards to be presented including Elders of the Year, Artists of the Year, and Reconciliation awards.

MEDIA ATTENDANCE: All members of the media are invited to attend the Yule River meeting from 2pm on Day One – Wednesday 11 July 2018, including the opportunity to camp overnight, and attend 9.30am – 4pm Day Two – Thursday 12 July 2018.

Meetings held at Yule River are historic, and have been organised by Aboriginal people in the vast Pilbara region for decades.

The dry river bed off the North West Coastal Highway, just south of Port Hedland, is seen as a place where people from different language groups can come together to discuss common issues affecting Aboriginal communities across the region.

Stemming from the actions taken in the lead up to the 1946 Pilbara Strike, when Aboriginal people held secret meetings in remote bush locations to plan an ambitious three-year walk off by Aboriginal pastoral workers who were living on cattle stations in conditions of virtual slavery, Pilbara Aboriginal people continued in their efforts to advocate for improved conditions and outcomes by organising bush meetings.

During the land rights era, from the late-1970s, Yule River became the focal point for such gatherings which were often attended by up to 2,000 Aboriginal people from all over the Pilbara.

At this time, “Old Man Parker” (born Herbert), was the Pilbara representative for the National Aboriginal Consultative Committee, the first national body elected by Aboriginal people, and introduced by the Whitlam Government.

Mr Parker presided over these meetings on the river’s sandy banks as Aboriginal people from all over the Pilbara region gathered to talk about lands trust business, housing complaints, and land rights.

Many important initiatives have been borne from Yule River meetings, with both concerns and solutions coming directly from Pilbara Aboriginal people; and with government expected to attend to hear and address their concerns.

Through the efforts of then YMAC Co-Chairperson, Mrs Doris Eaton (whose father was a key player in the 1946 Pilbara Strike), and the YMAC Pilbara Regional Committee, the Yule River meetings recommenced in 2014.

All language groups from across the region are invited to attend these meetings and share their concerns.

Much like they were decades ago, gatherings at Yule River are an important opportunity for a diverse range of Aboriginal voices to be heard.

To view all of our Media Statements, please click here

Donny Wilson, YMAC Regional Manager (Pilbara) was interviewed by CAAMA radio about the 2018 Annual On-Country Bush Meeting at Yule River meeting place. He describes the purpose and structure of the Yule River event, and mentions the special guests from State and Federal government. This interview has raised awareness of the work of YMAC to a new audience.

Listen to the interview here: Donny Wilson on CAAMA Radio