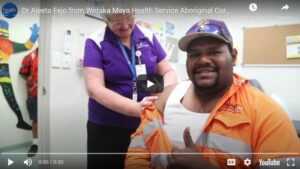 The 2021 Pilbara Annual Regional Meeting (PARM) is on Friday November 19, 2021. It will be located at the Walkabout Hotel – 944 Great Northern Highway, Port Hedland.

Attendees are requested to arrive at 9am for a start of 9:30am SHARP. The meeting is due to finish around 2pm.

Lunch will be catered.

YMAC is not funded to pay travel allowance for the attendance of members at this meeting.

The Port Hedland office will be moving location on Tuesday 23 November and reopening on Friday 26 November. Note – Port Hedland staff will divert their phones to the Perth office as they oversee relocation, unpacking,  IT and equipment set-up, etc on 24 and 25 November. The mailing address will remain the same but the new office location is:

Boost for bushfood and Aboriginal businesses

A new opportunity has emerged for Western Australian Aboriginal businesses looking to break into the bushfoods industry.

Developed by the State Government in partnership with Outback Academy Australia, two guides have been developed highlighting the risks and opportunities for Aboriginal businesses, as well as promoting best practices for industry in the bushfoods sector.

The industry is highly lucrative, with the Australian bushfoods industry being valued at $21.5 million at the farm gate in 2019, but with Aboriginal businesses only accounting for 15 per cent of the industry.

The guides are available at https://www.agric.wa.gov.au/aboriginal-business-development-0

It is now easier than ever for residents in country WA to receive a COVID-19 vaccination thanks to a new initiative being rolled out by the State Government.

14 new pop-up clinics are set to launched across WA in Geraldton, Fitzroy Crossing, Newman, Karratha and Broome, with Paraburdoo, Tom Price, Hedland, Halls Creek, Wyndham, Kununurra and more locations to be announced in the coming weeks.

In Geraldton the vaccination drive is being coordinated by Geraldton Regional Aboriginal Medical Service and in its first two days of operation saw more than 150 Geraldton residents get the jab.

The clinic is open now between 9am and 3pm, Monday to Friday until October 22 at 60 Rifle Range Road, Geraldton, with no appointment necessary.

Aboriginal and Torres Straight Islander people from across the Mid West, Murchison and Gascoyne will have the opportunity to have their say about common issues affecting them and their communities when the inaugural Yamatji On Country takes place in Carnarvon on 13 and 14 October.

The two-day meeting will see discussions around the coming Aboriginal Cultural Heritage Bill 2021, and language preservation, with community members and invited guests joining the discussion.

Yamatji On Country will be held in Carnarvon at Gwoonwardu Mia – Gascoyne Aboriginal Heritage and Cultural Centre, 146 Robinson Street Carnarvon.  To find out more call our Geraldton office on 9965 6222 or visit ymac.org.au

To find out more about Aboriginal peoples’ concerns about the bill, visit www.protectaboriginalheritagewa.org.au 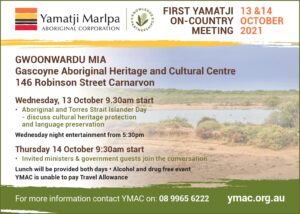 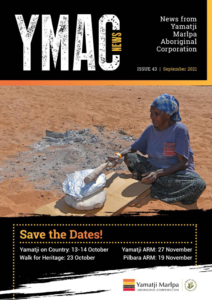 An important project to recognise the history of Aboriginal imprisonment and heal the impacts of Aboriginal incarceration Wadjemup (Rottnest Island) continues to gather pace.

Between 1839 and 1931 more than 4000 Aboriginal men and boys were forcibly taken to Wadjemup and almost 400 never returned. Many of them came from within YMAC’s representative regions – the mid-West, Murchison, Gascoyne and Pilbara.

The Western Australian Government is working in partnership with the Whadjuk, Noongar and greater Aboriginal communities to formally acknowledge and reconcile the Aboriginal prison history on the Island. Whadjuk Elders and Leaders have developed a decision-making structure to support Aboriginal governance within the project, known as a Cultural Authority Framework. It is being implemented with the support of Department of Premier and Cabinet, and the Rottnest Island Authority.

The project is intended to include truth-telling, ceremony, and commemoration through memorials.

The State Government has recently announced the release of both its revised ‘Aboriginal Empowerment Strategy 2021-2029’ and Western Australia’s first ‘Closing the Gap Implementation Plan’.

As part of their release, the State Government has declared these are “two significant documents that, together, represent an important step forward on the journey of resetting the relationships between Aboriginal people and the Government in Western Australia”.

As described in the respective documents:

Having submitted a response to the December 2019 discussion paper, A Path Forward: Developing the Western Australian Government’s Aboriginal Empowerment Strategy, YMAC is pleased to see the State Government has incorporated some of the feedback provided. For example, it is particularly encouraging to see the inclusion of ‘truth-telling’ as a fundamental element of the revised strategy, as well as the retainment of ‘culture’ at the centre of all its objectives.

This level of encouragement appears to be shared by the Aboriginal Advisory Council of Western Australia (the Council), with its two Co-Chairs, Gail Beck and Martin Sibosado, stating: “The Council welcomes the release of the Aboriginal Empowerment Strategy and this first iteration of the Government’s Closing the Gap Implementation Plan; both important steps in building a deeper relationship between Aboriginal citizens of Western Australia and the State Government… It is vital that Government recognises the centrality of culture for Aboriginal people and engages with us in the spirit of genuine partnership to develop solutions that improve our own lives. The Council has been clear in advising the Government that we expect to see our people participating as equals across the State.”

If you would like more information about either of these documents, please email AboriginalEngagement@dpc.wa.gov.au or call 08 6552 5333.