You can watch the determination video here.

If you have a query regarding membership of the Yamatji Southern Regional Corporation Limited (YSRC), or would like to know more about the agreement, please contact the Corporation at Yamatjicentral@outlook.com

Negotiations formally started on 6 November 2017 with the signing of the Grant Agreement that commits the State to funding parts of the negotiation process.  Negotiations led to a draft agreement called the Geraldton Alternative Settlement Agreement (GASA) and this was later changed to Yamatji Nation Southern Regional Agreement (YNSRA). This settlement agreement covers the area in the map below (the Separate Proceeding Area (SPA) or settlement area).

On 8 November 2017, the Federal Court set a deadline for the State and the claim groups to negotiate and reach an Agreement by 27 December 2019. The original four claim groups agreed to lodge a new single claim overarching the entire SPA area known as the Yamatji Nation Claim.

YMAC provided ongoing advice and representation to the native title claim groups that it represented in the SPA, which were Hutt River, Southern Yamatji, and Yamatji Nation (including descendants of additional ancestors of those who were not included in the original underlying claims). Mullewa Wadjari were represented by Corser and Corser consultants and Widi Mob by MPS Law consultants.

The native title claim groups authorised an Indigenous Land Use Agreement (ILUA) on 9 December 2019, which is known as the Yamatji Nation ILUA. It is an agreement between the State and all five claim groups in the SPA.

What was the role of the Federal Court in the negotiations?

On 7 February 2020, an on-Country Federal Court hearing was held in Geraldton for the people from the Yamatji Nation Claim. It included both a native title consent determination and the signing of the landmark Yamatji Nation ILUA with the State Government of Western Australia.

Documents related to the Yamatji Nation ILUA can be accessed electronically here.

Who negotiated on behalf of the claim groups?

The original SPA claims set up a 12-person Traditional Owner Negotiation Team (TONT). Through their Working Groups, each of the claims nominated and authorised representatives to be on the TONT.

Negotiations between the TONT and representatives of the State of Western Australia began on 14-15 November 2017 in Geraldton. The TONT  continued to negotiate face to face with the State to reach the best possible agreement up until December 2019.

The aim was to achieve an agreement that reflected the aspirations and needs of the Traditional Owners’ community in the SPA as a whole. The TONT’s vision statement was, “A progressive and equitable agreement that recognises us and our Country, supports our growth and provides us with control of our destiny.”

This agreement was endorsed by the community in December 2019. 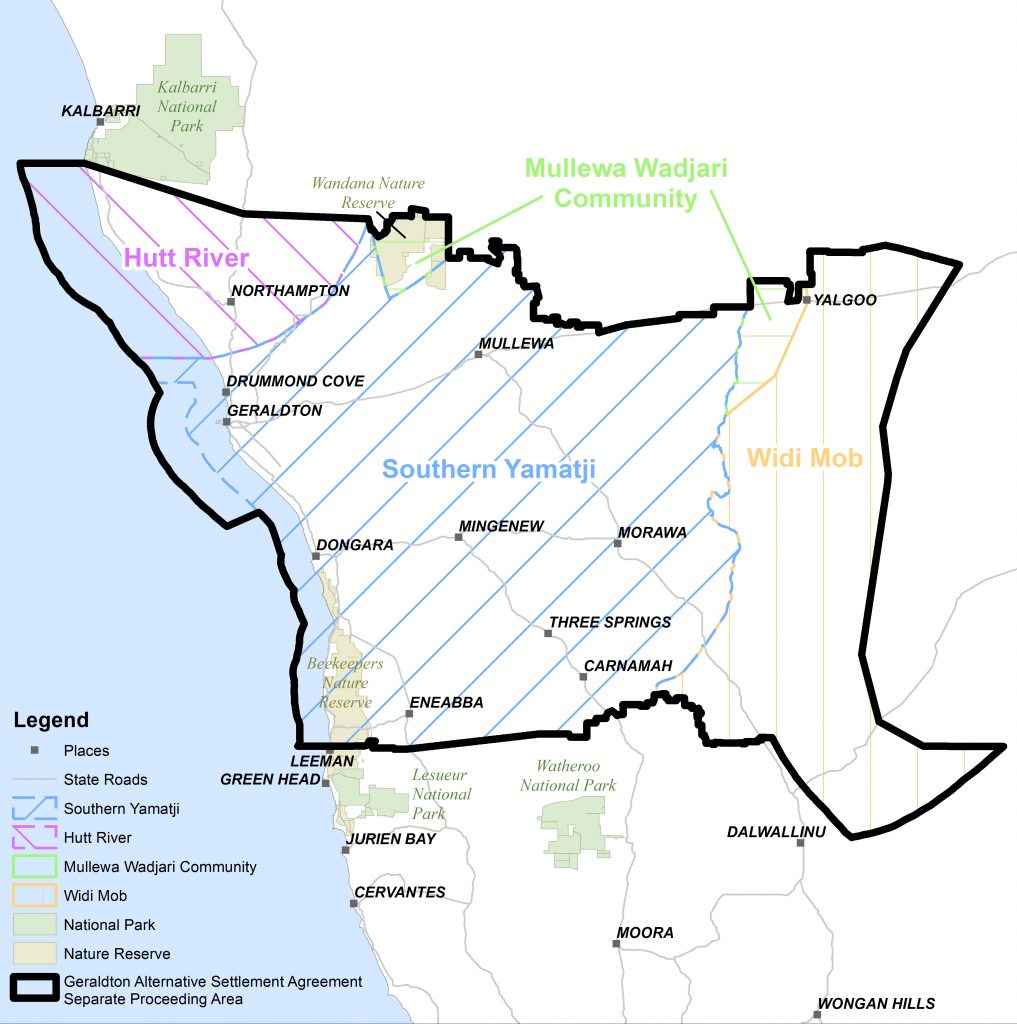 YMAC is the native title representative body for the Pilbara, Mid West and Gascoyne regions of Western Australia. Since 2017 YMAC has supported and provided advice and representation in relation to YNSRA to foster a strong future for Aboriginal people and Country.

A project as complex as the YNSRA required specialised project management. This journey has been a 20-year process for YMAC and even longer for Traditional Owners.

To demonstrate the magnitude of this project, over 100 YMAC employees and external consultants have contributed to the project over its course.

The nature of the overlapping claims between four different groups in the Mid West of WA made this project more complicated than any other that YMAC has been involved with.

The current YMAC teams that were involved in the project include lawyers representing the Southern Yamatji, Hutt River and Yamatji Nation Claims. Research was comprised of highly skilled anthropologists who conducted archival and genealogical research, cultural mapping and analysis of ‘laws and customs’ as outlined in the Native Title Act 1993.  Heritage experts provided detailed specialist advice to the TONT, attended TONT workshops and Federal Court Mediations and prepared Heritage agreements.

Geospatial (GIS) assisted the TONT and their legal advisors with specialised mapping and land tenure analysis. They produced numerous maps including a 3D map.  A dedicated YNSRA Communications Coordinator collaborated with project team members and the TONT to deliver a comprehensive communications strategy for claimants and key stakeholders.

Below is a record of published information for the community throughout the history of the project.

YMAC’s release can be read here

Following the two day December 2019 Authorisation meeting, the Minister for Aboriginal Affairs Ben Wyatt, released a statement announcing the outcome voted for by claimants who attended the meeting.

The Minister’s release can be read here

The Minister for Aboriginal Affairs Ben Wyatt has today released a Media Statement entitled Comprehensive Native Settlement over Geraldton and the Mid-West, which provides an announcement about the Yamatji Nation Southern Regional Agreement (YNSRA).

Details of the Agreement remain confidential while the matter is in Federal Court mediation, until a final decision is made by the YNSRA claimants at a later date.

Please read the Minister’s Media Statement at the link below. 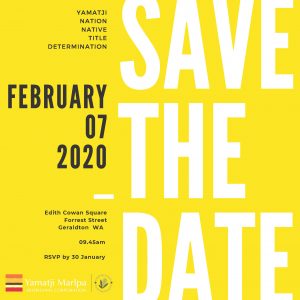 The Yamatji Nation Southern Regional Agreement will be decided at a two day meeting on 8 and 9 December, in Geraldton.

8 December is an information session about the Indigenous Land Use Agreement (ILUA).

9 December is the Authorisation meeting for the ILUA. 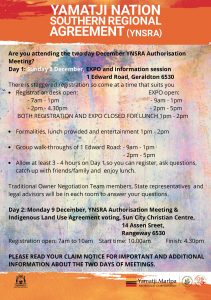 For more information please select the link for your claim group:

Further details about Day One of the meetings are contained in the event program and map: 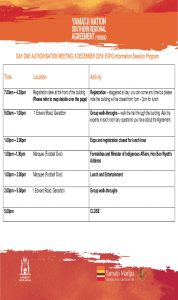 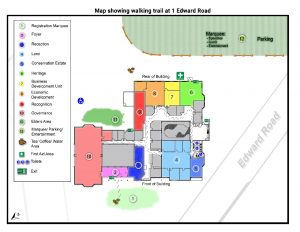 Information Opportunity - come have a cuppa!

JOIN US FOR A CUPPA AND A CHAT

Are you a claimant in the YNSRA Separate Proceeding Area?

We have a lawyer and Anthropologist at our Geraldton office
who can answer your questions about the Agreement.

Every Tuesday from 4pm-6pm until the Authorisation Meeting on 9 December. 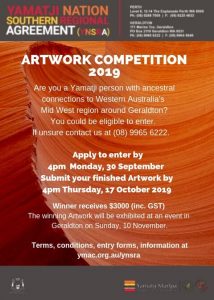 around Geraldton, you are invited to enter.

The winner receives $3000 (inc. GST) and the Artwork will be exhibited at a YNSRA event in November at Geraldton.

Share your creativity with us and you could be the winner!  All you need to do is submit a two dimensional work of art in any medium.

To enter download the Terms and Conditions and Entry Forms at the link below and post in or email your completed entry form by the following date.

See the Artwork Competition Flyer at the link below for addresses to YMAC Perth and Geraldton offices.

Good luck to all entrants!

10 community information sessions are being held from Wednesday 6 March and  Thursday 28 March 2019 in different locations around Western Australia.

All members of Hutt River, Mullewa Wadjari, Southern Yamatji and Widi Mob claims are invited to attend one or more meetings.

Please note: The sessions are not open to the public or media and only members of these claim groups may attend.

For more information about the community sessions and to view the schedule and locations for March 2019 please click here.

Outside of these scheduled meetings, YMAC staff members are available to meet briefly with individuals and groups. Please let the YMAC YNSRA team know if you are interested in this option by filling in the “Contact Us” form at the bottom of this web page.

PLEASE NOTE THAT THE PORT HEDLAND SESSION ON 28TH MARCH HAS BEEN CANCELLED.

Links to other websites

Hear from the Traditional Owner Negotiation Team (TONT), why it is important you are involved in the YNSRA.