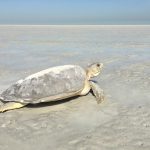 There are 16 Aboriginal rangers who jointly manage the Marine Park Reserve with the Department of  Biodiversity, Conservation and Attractions and the Karajarri Traditional Owners. The work engages Aboriginal rangers on Country to participate in long-term data collection and monitoring of the species.

During the November to January turtle breeding season, six kms of the beach is monitored. The rangers mark the night nests, do a daily track count and egg count in January. This helps to determine if the turtles are being affected by humans and feral predators.

Threats to this species include direct harvest for meat and eggs, entanglement in fishing gear, destruction of nesting beaches from coastal development, pollution and destruction of feeding habitat (coral reefs and shallow nearshore areas). Dingoes and foxes once posed a significant threat to their nests but thanks to predator control programs, this threat has been greatly reduced.

The flatback turtle is named after its flat carapace, or shell, which is unlike the curved shell of other sea turtle species. In comparison to other sea turtles that lay 100-200 eggs per nest, this species lays an average of 50 per nest.