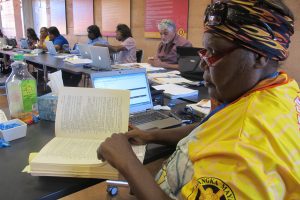 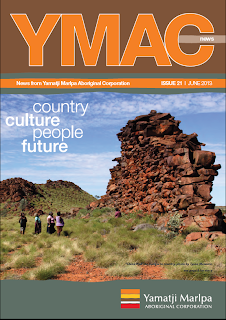 The latest issue of YMAC News is now available for download!

It features a cover story about YMAC’s work with Yamatji and Pilbara Traditional Owners to digitally record their stories on film for the Indigenous Community Stories initiative. There is news about mining agreements made between the Yugunga-Nya people and Ventnor Resources; the Yinhawangka people, Rio Tinto and Dragon Energy; as well as Badimia and Top Iron.

You can also read about the proposed Nyangumarta Warrarn Indigenous Project Area (IPA) and the collection of the Nyangumarta people’s knowledge and stories, facts on Preservation evidence, and the management of traditional country.

There is also information on YMAC’s Community Liaison Officers, YMAC Directors, and new Co-Chair of the Board, Mr Victor Mourambine.

Under the agreement, Yinhawangka consent to all activities associated with the development of an iron ore mine at Dragon’s Rocklea Central and North deposits. It also allows for further mining leases within the area.

The Agreement follows 12 months of constructive consultation and covers milestone and production payments, employment opportunities as well as cross-cultural exchanges and consultation on environmental matters.

Yinhawangka representative Roma Butcher said, “It was a pleasure doing business with Dragon Energy. Dragon’s General Manager Gang Xu was so easy to talk to and clearly has a huge respect for Yinhawangka People.

“I feel that Dragon worked with us respectfully and understood things we had to say about the Country, the flora and fauna, and how these things are important for us, our community and our health. Dragon Energy had empathy for what we are trying to achieve, and that meant that in return we also wanted to work with them. Maybe some of the Chinese cultural values that Gang Xu brought to our meetings were similar and led to understandings of our Aboriginal culture.

“Our flora and fauna are very important to us – as our Country is – and it’s good to know that Dragon Energy respects that, and respects our knowledge of the Country and the river system, and have agreed to include Yinhawangka People in ongoing environmental management.”

Dragon Energy’s Managing Director, Mr Gang Xu, commented that the parties had developed an excellent working relationship and looked forward to this continuing with the development of Pilbara Iron Project.

“Our negotiations with the Yinhawangka People have been based upon a strong mutual respect and have focussed on achieving outcomes that will benefit of both parties.

“We look forward to working with the group to develop our Pilbara Iron Project and at the same time provide opportunities to the Yinhawangka community and preserve their heritage and customs.”

Simon Hawkins, CEO, Yamatji Marlpa Aboriginal Corporation said, “Dragon Energy listened to concerns the Yinhawangka People had regarding impact to the Hardey River and have put in place an ongoing program to incorporate traditional ecological knowledge. Both parties showed great flexibility which has led to a strong relationship.”

The Yinhawangka People of the Pilbara region of Western Australia have announced a major agreement with Rio Tinto.
The Yinhawangka People are the native title claimants and traditional custodians of approximately one million hectares of land and waters in the central Pilbara, including the mining town of Paraburdoo. The agreement covers Rio Tinto’s existing, current and future iron ore mining operations within Yinhawangka country and, importantly, establishes protocols for the protection of homeland communities and areas of special significance. This includes the exclusion of an area of outstanding cultural significance to the Yinhawangka People.
It provides a range of economic and non-economic benefits for the Yinhawangka People, including significant financial benefits from mining on their traditional country; special treatment of areas of high cultural significance; employment and training opportunities; support for Pilbara Aboriginal business development and contracting; and a collaborative approach to environmental and cultural heritage management.
Yinhawangka Traditional Owner, Darren Injie, said it had taken over twenty years of hard work for the Yinhawangka People to establish their homeland communities and reach today’s milestone.
“I want to acknowledge a lot of important people whose leadership contributed to this agreement, and who are no longer with us today. This wasn’t the work of one or two people, it’s been a community effort.  I also thank Yamatji Marlpa Aboriginal Corporation; we would not have an agreement with this kind of scope and integrity without their ongoing support.”
Click here to read the full media release.