You are here: YMAC > WA Museum

Be a community advisor in Geraldton

The WA Museum in Geraldton is looking for new members for its Community Advisory Committee, and Aboriginal applicants are strongly encouraged to apply.

WA Museum CEO Alec Coles said he hopes to receive Expressions of Interest from people who want to be part of the history and future of Geraldton and the Mid West.

Expressions of Interest including a statement outlining suitability and a current resume should be mailed to Leigh O’Brien, WA Museum – Geraldton, PO Box 2229, Geraldton, WA 6530, or emailed to leigh.o’brien@museum.wa.gov.au by 4pm, 19 June 2015. 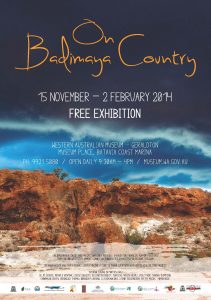 Yamatji Dolls and Yarning on show in Geraldton

Dolls and Yarning is an exhibition of dolls created by Yamaji parents, grandparents and young people in Geraldton and Northampton, Western Australia.

The exhibition comes after a series of doll making skills were learnt and shared in workshops during the year, that included yarning about family, learning, culture, play and education. As the creative process unfolded these inanimate objects came to life as the dolls and yarns became closely stitched together while Aboriginal ways of teaching and learning were explored, honoured and celebrated.

The exhibition runs until 5 November at the WA Museum Geraldton, Batavia Coast Marina.

Dolls and Yarning has been developed and presented by Western Australian Museum Geraldton in partnership with the Geraldton Regional Community Education Centre. The Dolls and Yarning project is funded by the Department of Education, Employment and Workplace Relations (DEEWR) through the Parental and Community Engagement (PaCE) program.