For the last three years, students at Rangeway Primary School in Geraldton have been learning to play the didgeridoo at school through a music program started by music and arts teacher George Scicluna.

Didgeridoo players Robert Tester and Rolan Deutokom have been taking time out of their regular work days  to teach the students for an hour a week, and it is clear the practice is paying off. Last year, the students opened up the Reconciliation Concert at the local Queens Park Theatre, supporting Archie Roach (see video below) and played in front of thousands at the local Football Finals.

The program has gained funding from local mining groups and worked collaboratively with the local Bundiyarra Aboriginal Corporation to put on workshops and performances. Goerge Scicluna reports that they are now in the second phase of planning where they are helping other schools to engage and become part of the program. 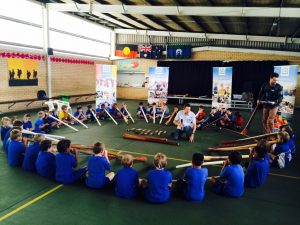