You are here: YMAC > Environment 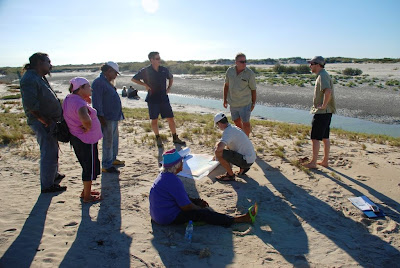 Nyangumarta Traditional Owners are working with the Department of Environment and Conservation (DEC) to conserve the special marine environment of the Eighty Mile Beach area.

Consultation has been undertaken over 18 months between the Nyangumarta people, Yamatji Marlpa Aboriginal Corporation (YMAC) and the Marine Policy and Planning Branch of DEC. In addition, DEC has been working with six other native title groups along the Pilbara coast to investigate the idea of marine parks and reserves.

Engagement with the Nyangumarta people
· In separate groups, men and women recorded sites of resource use and special features. From these mapping exercises, the working group recognised a number of important cultural areas along Eighty Mile Beach.

· Nyangumarta aspirations for their coastline and sea country are best summed up by the phrase “Ngalpa warran, ngalpa marrngu”, which translates to “Healthy country, healthy people”.

Nyangumarta Traditional Owner, Nyaparu Rose said, “The best part about the process was that DEC came to the people. They sat down and learned from us. We taught about the seasons, about hunting and fishing, about bush foods. It was also a chance for young Nyangumarta people to go out on country and learn from their Elders. So it was like a workshop for our younger generations too.”