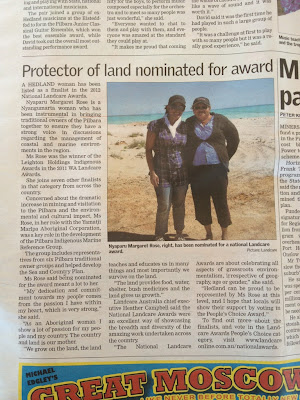 The finalists for the 2012 National Landcare Awards have been announced, and all Australians can get involved by voting in the ‘People’s Choice’ category.

Landcare is a community based volunteer movement made up of individuals and groups who work on managing environmental issues in their local areas. The awards aim to showcase the breadth and diversity of the work undertaken by people across the country who volunteer their time to protect Australia’s land and coast.

YMAC would like to extend a special congratulations to Nyangumarta woman, Nyaparu Rose, who has been selected as a finalist. Ms Rose has worked tirelessly with Pilbara Traditional Owners to ensure their voice is heard in discussions about the management of coastal and marine environments in the region.

Ms Rose helped to establish the Pilbara Indigenous Marine Reference Group (PIMRG), which includes representatives from six Pilbara Traditional Owner groups. The PIMRG aims to consolidate traditional knowledge from the region so that Traditional Owners can more effectively conduct negotiations with government and industry on cultural and coastal protection.

If you would like to vote for Nyaparu Rose in the National Landcare Awards, click here and follow the prompts. Ms Rose is in category 7, under ‘WA – Yamatji Marlpa’.

Voting closes 4pm (EST) Tuesday 4th September, and winners will be announced that day at the Awards ceremony, held at the Sydney Convention and Exhibition Centre.

YMAC would like to congratulate all finalists who have been nominated for an award.

Click here for more information on Nyaparu Rose’s achievements, and here for a list of all the other 2012 Landcare Awards finalists.