A short film about the Nyangumarta-Kiwirrkurra Ranger team exchange last year has been named as one of 21 international finalists at the UNESCO-supported Earth Futures Festival.

Marrngumili Warrarn Muwarr Pirraja – Sharing Desert Stories follows Nyangumarta Rangers – a ranger program operating with support from YMAC’s Land and Sea Management unit – as they travel through the Great Sandy and Gibson Deserts on the road to Kiwirrkurra, about 1200km east of Port Hedland and 700km west of Alice Springs.

Over four days in August 2021, the Nyangumarta Rangers shared skills, stories and song with 11 Kiwirrkurra and three Li-Anthawirriyarra Sea Rangers from Borroloola.

Together they hunted for feral cats over spinifex-covered sand plains, discovered the burrows of the endangered Tjalapa (Great Desert Skink) and visited Wilkinkara, a breathtaking salt lake and sacred place for the Pintupi people.

The documentary, selected out of 972 entries from 89 countries as one of three finalists in the Indigenous and First Nations category, was produced by YMAC Nyangumarta Rangers IPA Coordinator Jacob Loughridge and directed by Indigenous Desert Alliance Strategic Communications Coordinator Luke Sweet.

The aim of the Earth Futures Festival is to connect geoscience and the arts, helping to raise international awareness of the role earth science plays in building a sustainable future.

Marrngumili Warrarn Muwarr Pirraja – Sharing Desert Stories can be viewed at tinyurl.com/sharingdesert. Please be advised: certain scenes in the film may be confronting for some viewers.

Public voting is open until 15 September – go to tinyurl.com/desertvote.

The Earth Futures Festival will culminate in screenings and award events hosted at the UNESCO Headquarters in Paris and venues in Sydney and New York in October. 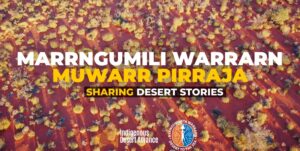 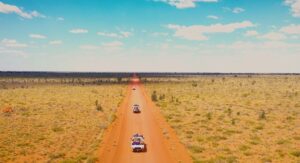