Today, YMAC acknowledges and pays tribute to those strong leaders from our Pilbara region who showed us how to Get Up! Stand Up! Show Up! when they led the 1946 Pilbara Strike.

In 1946, Aboriginal pastoral workers commenced their well-organised public pursuit for better pay and working conditions in the Pilbara. Hundreds of people walked off more than 20 stations, affecting about 10,000 square kilometres of farming country in the region. At its height, at least 800 people were on strike, and by 1949 award rates were finally won. Having lasted for three years, it remains the longest strike in Australia’s history, and, understandably, holds great historical significance.

The strikers’ strength and resolve to ensure a fairer future for themselves, as well as generations to come, has since become an inspiration for many. Their bravery and determination forced changes that helped initiate the restoration and recognition of their basic human rights.

Each year, the anniversary of the 1946 Pilbara Strike also draws attention to the legacy of the courageous actions of these Pilbara people who stood up for their rights and made their voices heard.

Aboriginal and Torres Strait Islander people are advised that this article may contain images of deceased people. 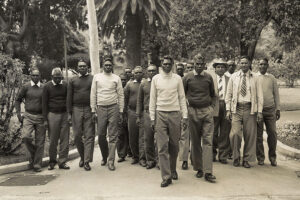