For many Aboriginal Communities in the Midwest and Pilbara, December to January is a special time of year to observe cultural obligations and practices.
Out of respect for these traditions, YMAC will not be conducting any heritage surveys between Monday 17 December 2012 and Friday 1 February 2013.
Any heritage survey requests received after 17 December will be scheduled to commence after 1 February.
Thank you for your understanding.
All YMAC offices in Perth, Geraldton, Karratha, South Hedland and Tom Price will be closed during the festive season from Thursday 20th December 2012, re-opening on Wednesday 2 January 2013.
YMAC’s Board of Directors, Pilbara and Yamatji Regional Committees, Management and Staff would like to wish you a happy and safe festive season.

The Ngarlawangga native title group today announced the signing of an agreement with Montezuma Mining Company Ltd (Montezuma) for the Butcherbird manganese project over 23,000 hectares of their traditional country, south of Newman, as well as consents to future mining in the area.
The agreement has seen Traditional Owners and Montezuma develop a framework for how they will continue working with each other, including assisting Ngarlawangga people into employment, agreed processes and timeframes by which heritage clearances will take place and support for tendering for new contracts for community businesses.
The signing includes an agreed process should the mining company apply for permission to disturb heritage sites, which provides both parties with a guaranteed consultation process under the Aboriginal Heritage Act (WA).
Ngarlawangga Traditional Owner Dianne Limerick said, “The discussions with Montezuma went well – we’re now hoping for jobs and business contracts to develop from this agreement.”
Yamatji Marlpa Aboriginal Corporation (YMAC) CEO Simon Hawkins said, “Montezuma listened and responded to the community’s needs throughout the process. In turn, the Ngarlawangga people were able to reach agreement quickly, giving the company certainty. Both parties are particularly focused on supporting new and existing Ngarlawangga contracting companies to benefit from this project, including incentives for community businesses”.
Click here to read the full media release.

The University of Western Australia is now offering a one-year course to mature age Aboriginal students which will provide them with direct entry into a new post-graduate law degree at UWA.

Starting in 2013, the Advanced Diploma in Indigenous Legal Studies has been devised by UWA’s School of Indigenous Studies and the Faculty of Law to ensure that Indigenous people have equality of opportunity to succeed in mainstream law and engage with the legal isssues affecting Aboriginal people.

The Diploma provides students with both the theoretical and practical training needed to pursue a legal career in Australia, with the chance to obtain scholarships and financial assistance from some of Western Australia’s most prestigious law firms and government departments.

For eligibility and requirements, please visit the UWA website, or contact Mel Thomas at mel.thomas@uwa.edu.au for further information.

In conjunction with the City of Greater Geraldton, the program allocates funds to groups who can demonstrate how their activites would benefit the community.

To be eligible, projects proposed by community groups should be in the areas of youth leadership development, arts and cultural activities, sports and recreation, community welfare or tourism.

Application forms can be obtained from the Mullewa district office, or downloaded from the City of Greater Geraldton website.

To promote its new office and physical presence in WA, AIMSC has organised a roadshow up the West Coast, visiting Perth, Port Hedland and Broome.

The Road Show will cover:
• Real Opportunities in WA forum
• Express Certification for Indigenous businesses who are Sole Traders/Sole Shareholders-Directors
• An overview and information session on the up coming changes to the Indigenous Opportunities Policy (IOP) 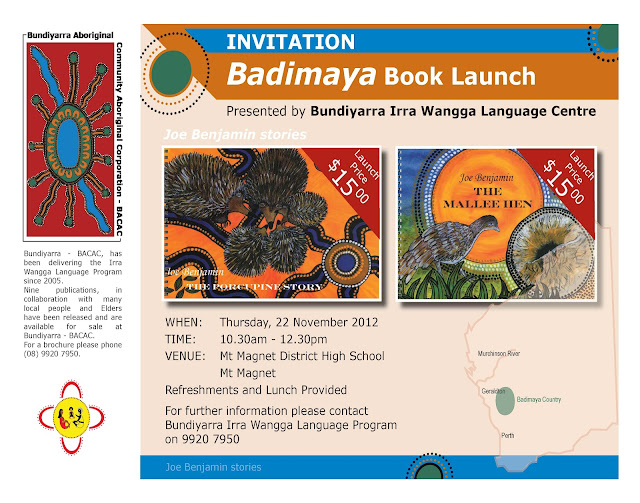 This will be a great event in Mount Magnet by the Bundiyarra Irra Wangga Language Program celebrating the books of Joe Benjamin, Badimia culture and language.

The Kurama and Marthudunera (K&M) native title group today announced the signing of an agreement with Iron Ore Holdings Ltd (IOH) over their Buckland Project in the Pilbara region of Western Australia.

It is the Pilbara’s first native title agreement to provide payments in respect of the use of water and clearance of native vegetation, giving an incentive for IOH to minimise their impact on the environment. IOH also showed flexibility in planning their mine footprint in order to avoid any impact on culturally sensitive sites near the area.

In addition to strong cultural and environmental protection, the agreement provides milestone and production payments, which are now standard features of native title land access agreements.

Kurama and Marthudunera Traditional Owner, Cyril Lockyer said, “The important thing now is to continue our good working relationship. This area is of great significance to the families involved and we want to work closely with Iron Ore Holdings to see these sensitive places protected.”

“This unique agreement is due to the genuine good-will and flexibility shown by both parties, and recognises the cultural and environmental significance of the area for the Traditional Owners. It goes well beyond the requirements of the WA Aboriginal Heritage Act by recognising that water and habitat are inextricably linked to cultural values,” said Simon Hawkins, CEO of Yamatji Marlpa Aboriginal Corporation.

Congratulations to all players in this year’s Wadjemup Cup! 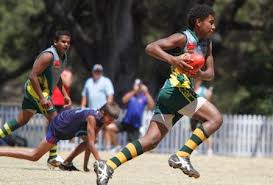 On Saturday 10th November, students from Clontarf Football Academies from across the State competed in a round robin AFL football competition held on the Sports Oval Rottnest Island. The students were selected to participate in the Wadjemup Cup based on their school attendance, commitment to their studies and upholding the values and behaviours of their respective academies.

The carnival saw involving approximately 120 students aged 12 to 15 years, competing as 5 teams from around the state:

For more information on this and Clontarf’s many other programs, visit www.clontarf.org.au