You are here: YMAC > YMAC > 1946 Pilbara Strike struggled for a fair future 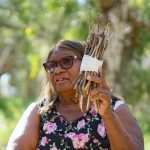 Mrs Eaton at the 2018 Annual On-Country
Bush Meeting at Yule River. This meeting
demonstrates the importance and strength
of Aboriginal people working together.

On this date in 1946, Aboriginal pastoral workers commenced their well-organised public pursuit for better pay and working conditions in the Pilbara, Western Australia. Hundreds of people walked off more than 20 stations, affecting about 10,000 square kilometres of farming country in the region.

Lasting for three years, the Pilbara Strike remains the longest in Australia’s history, and, understandably, holds great historical significance. At its height, at least 800 people were on strike, and by 1949 award rates were finally won. The strikers’ strength and resolve to ensure a fairer future for themselves, as well as generations to come, has since become an inspiration for many.

Taking much inspiration from the original strikers, Yamatji Marlpa Aboriginal Corporation (YMAC) is proud to support the current work of the Pilbara Aboriginal Voice (PAV); another group of committed and resilient local leaders striving to improve conditions within and on behalf of the community. PAV was formed at the 2017 Annual On-Country Bush Meeting at Yule River, when those present decided they needed a united regional approach to work with government on matters affecting them.

YMAC Board Co-Chairperson – Pilbara Region and PAV Member, Mrs Doris Eaton – a Njamal/Pitjakarli/Nyangumarta Elder – has a direct connection to the Pilbara Strike: her father, Mr Ernie Mitchell, was one of its leaders.

Mrs Eaton recently reflected, “I am my father’s daughter. I grew up with all the tribes across the Pilbara, and I too have been working tirelessly for my people. Back then, my father was fighting for Aboriginal people to be treated equally in this country. All these years later, I’m still fighting for the same thing… I want our next generations to get more education, so they can be independent. I also want them to learn their language and look after their land and culture. It saddens me that we still have to strive for these things, but we will carry on doing it because it’s too important not to. Just like our old people fought for us, we will keep fighting for the generations to come too.”

Today, YMAC pays its respects to the courageous men and women of the Pilbara who stood up for their rights in 1946-49, as well as those who continue to pursue a fairer future.